This blog contains affiliate links, which means we may earn a small commission from your purchases.

If you're new here, you may want to subscribe to my RSS feed. Thanks for visiting!

My daughter, her best friend and I learned about hot peppers this week.  It wasn’t a fun experiment, though we are able to laugh about it now that burning has stopped.

The girls each picked a pepper at the produce market.  They wanted to use them in chili.  I didn’t think anything of it.  They were veggies – sold in an open air market.  How bad could they be?   I figured we’d taste them and decide how much to use in the chili. 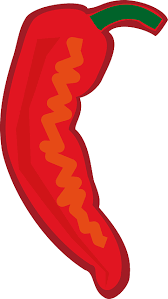 I didn’t even know what kind they were.

They were both extremely hot.  Crying, shaking, sweating, painfully hot.

I burned my eye lid by touching it even after I had washed my hands three times since handling the peppers.  My daughter’s bestie burned her nose the same way.  My thumb was on fire for hours after scraping out the seeds and ribs with it.

We were doing research on what to do to put out the burning while we were in the midst of the crisis.  Thank goodness for the Internet.

Put these things in your mouth after you’ve eaten a too hot pepper:

Do not drink water.  It will just bring the fire back more intensely.

Consider this a public service announcement.  Never, ever eat hot peppers without knowing what they are and the heat level.

We went ahead and made our chili after the fires went out and we threw the peppers away.  It was the mildest chili ever and we gobbled it up happily!

Previous Post: « Healthy eating: How to cook oatmeal in a skillet
Next Post: Vinnie Tortorich is right: “F*ck Quinoa!” »

This site uses Akismet to reduce spam. Learn how your comment data is processed.

Are you (or have you ever been) a self described hot mess? Welcome! This is your place. You’re with your people. If you appreciate honesty, unfiltered realness and looking for the humor even in dark times, you’ll be quite comfortable here! Rambling Rach is a lifestyle blog devoted to healing and finding life beyond marriage and motherhood. Read More…